Cakewalk and OurStage.com, along with new sponsors Orange Amplifier, Gibson Guitars, and Blue Microphones, have come together to launch with Intel Corporation another exciting competition for emerging artists. 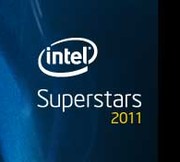 All submissions will be ranked by fans through OurStage’s patented judging technology, with prize packages awarded to the First Place winners from each genre-based competition. One Grand Prize Winner will be selected by a panel of industry experts from amongst the Top 10 overall ranked artists.

More than $35,000 in prize packages will be awarded to the First Place winners, including Intel® Core™ i7™ processor-based Orange Amplification OPC’s, Cakewalk SONAR X1 Production Suite Software, Gibson Guitars, Blue Microphone’s Yeti professional USB mic, as well as promotion to the millions of OurStage.com and Intel fans. In addition, one lucky fan will win a Gibson USA Firebird X Guitar. The Grand Prize Winner will receive $10,000 in cash that can be used to record an album, tour the country, fix up the band van, pay the rent, or anything else a ”Superstar” would need.