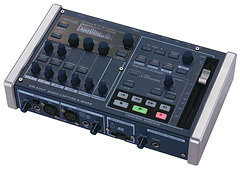 Cakewalk has announced the SONAR V-Studio 100, a portable music production studio that lets you create, record, produce and perform music with or without a computer.

SONAR V-Studio 100 elegantly combines the most essential tools needed by today’s modern music producers and performing musicians in a compact and affordable package.