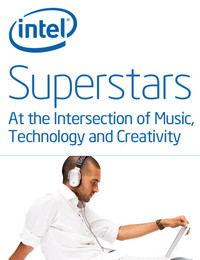 Now, the top 20 artists from the Latin, Urban, and Singer/Songwriter music genres, along with the Intel “Superstars” Competition on the rock, pop and country genres automatically advance to the Intel “Superstars” Finals Competition for a chance to win the Grand Prize of $10,000 cash! That money can be used to record an album, tour the country, fix up the band van, pay the rent, or anything else a ”Superstar” would need. The Grand Prize will be awarded at the conclusion of the contest in January 2011. Check out http://www.facebook.com/intel for more information.