Cakewalk has announced the release of SONAR X1 Advanced Workshop: Next Level with Craig Anderton, an instructional video tutorial. 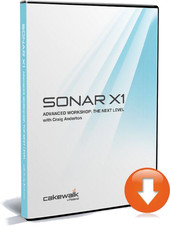 Picking up where SONAR X1 Advanced Workshop left off, SONAR X1 Advanced Workshop: Next Level stretches your imagination and redefines what you thought was possible with SONAR X1. With decades of experience as a producer, engineer, and performer, Craig Anderton dissects SONAR X1 to a level never seen before. And best of all, he de-mystifies these techniques for users of any level.

Well beyond the in-depth exploration of production techniques in the first Advanced Workshop, SONAR X1 Advanced Workshop: Next Level includes 30 never-before-seen video tutorials that will blow away even the most veteran SONAR user. With nearly 2 hours of run time, these video tutorials provide insight and techniques that only Craig, the quintessential gear-geek, can provide. Ever heard of an “Acoustifier”? Craig shows you how to construct one inside SONAR X1—in minutes. Wish you could re-create some of the vintage effects, like true tape flanging, that defined music in the 60s and 70s? Now you can, thanks to an entire chapter dedicated to Vintage Effects. How about ambient and spatial effects once possible only in expensive studios? Final touches to masters? Virtual guitar re-tuning? Unprecedented distortion sounds? All are possible inside SONAR X1, as this video guides you with step-by-step details.