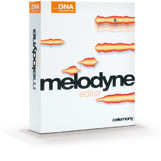 Celemony has released version 1.2 of Melodyne editor, assistant and essential.

The update brings 64-bit support and improved transfer handling as well as extending MIDI export to the plug-in implementations of Melodyne editor and assistant. Melodyne essential supports additional plug-in formats and can now also be operated in stand-alone mode.

The update to Melodyne version 1.2 is free-of-charge for registered users. A new 30-day trial version of Melodyne editor (without any limitations) is available to download.