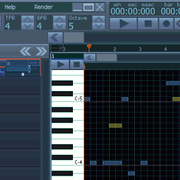 Chaotic Team has released version 1.06 of Chaotic, a program for fast music creation and experimenting.

Our goal was to create a music tool, that will be just as simple as Windows Notepad whilst allowing to create and manipulate complex musical patterns. So, although it can be classified as another software DAW, this is a composing tool in the first turn.

The basic composing feature, around which the rest of Chaotic functionality was built, is what we call “sequencing freedom”. Abstractly speaking, this is the ability to sequence any kind of stuff at any time without redundant limitations. The lack of such freedom often forces composers to search various workarounds in order to implement even trivial and obvious things, and it also makes the overall composition project too heavy and awkward for changing and experimenting with. With Chaotic, we are trying to minimize any kind of composing limitations.

Chaotic is available to purchase for Windows PC, for the introductory price of 45 EUR until 15 August, 2010 (regular price 65 EUR, prices excl. VAT).