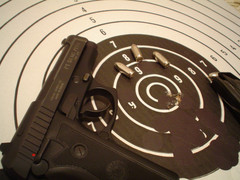 Gun Handling is a collection of Gun Mechanism and handling sounds. Featuring sounds from 13 different rifles, handguns, and shotguns. Included are sounds such as: gun cocking, magazine inserts/removes, bullets being loaded, dry firing, and more.

All sounds are newly recorded and mastered at 24bit 192K using a Sennheiser MKH800 high res condenser mic and a AEA R84 Ribbon mic. Both mics were run into Great River mic preamps to help make the sounds phat and huge.

Gun Handling HD PRO is available to purchase for $49 USD.