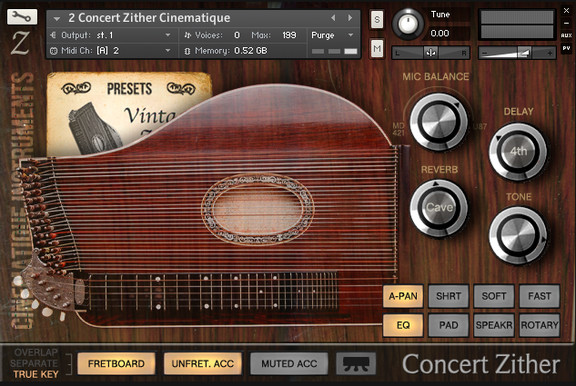 We treated the Concert Zither very hard. We plucked, stroke and strummed all the strings to get every possible sound, noise and articulation the Zither can make. Finally we assembled 6 different patches. Firstly there are two the main patch with all the 36 strings recorded in 4 round robin variations and several (up to four) dynamic layer. We additionally recorded the 31 accompaniment strings in a muted variation.

All these notes were recorded with two different types of microphones: a large-diaphragm condenser pair as well as a classic dynamic microphone. By turning a corresponding mic balance knob you can infinitely mix between these two different sound properties. Finally – in order to shape the sound – we added a complex script to achieve lots of different variations of the Concert Zither. By moving the mod wheel you can fade between vibrato and non-vibrato notes.

Beside the main complex patches we provide another 4 useful FX patches, separated into textures, strokes & hits (with dynamic layers) and weird noises. Here you find a great assortment of rare and exceptional FX string sounds.

The library is available for purchase for 38 EUR. Requires full version of Kontakt 4.22 or higher.