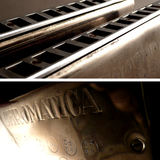 Cinematique Instruments has announced the release of Double Bass Harmonica, a sample library for Kontakt.

It was a tough cookie to catch the real timbre and authenticity of this giant harmonica. Thus we tested several recording settings in which we recorded at least every second note in a long sustained and a short variation. We ran with velocity layer and Round Robin variation and came out with three seperate sample sets recorded with different microphone set-ups. Beside this we recorded a typical flutter fx and added some scriptings to provide more opportunities.

Double Bass Harmonica is available to purchase for 18 EUR.