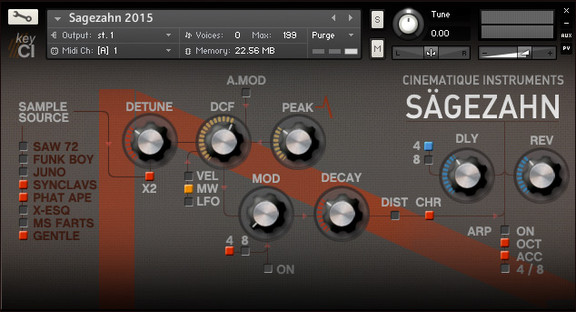 Saegezahn contains an assortment of sounds which were made by using the nasty sawtooth generator/ oscillators and filters of the Korg MS20, Roland JX-3P, Ensoniq ESQ-1 and Electro Harmonix Microsynth. Be assured Sägezahn is suitable for almost every music genre, even film-scores.

We sampled all mentioned machines and processed and edited the sounds enriched by filter works. In 2015 we updated the Sagezahn from the scratch. Firstly we put together all separate patches into one complex patch covered by a brand new GUI. It is now possible to play all the former saw patches as sample source at one time. You can layer many of them – as much as you like.

Cinematique Instrument is now also offering Cement 2 at no charge. 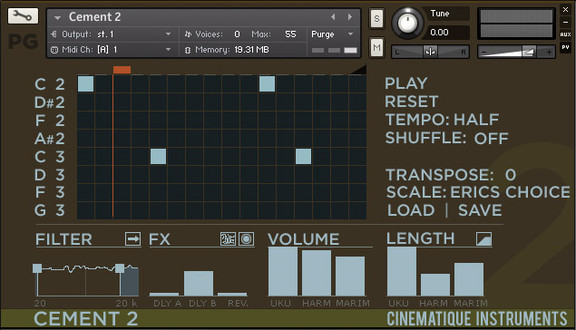 Cement is a sequencer based pattern generator which is well suitable to enrich your music production and lend it a specific character. As the name suggests you can easily create cementing textures, crawling patterns or a fundament for your musical idea.

For changing the entire sound character, Cement provides plenty of options to modify the sound to your very own requirements: lowpass- and highpass filter (with a random high pass modulator), distortion- and speaker switches, an alternate sinus sci-fi sound, separate length settings and separate slider to set the amount of two delays and a reverb.

Sägezahn and Cement 2 are now available to download for Kontakt 4 or higher (full version).