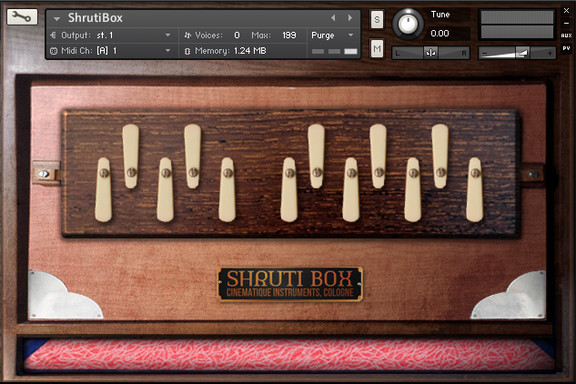 The Shruti Box is a traditional Indian instrument which works on a system of bellows. It is a keyless version of the harmonium, which was invented for the specifc purpose of producing drone sounds. On the front it has 12 valves to control the pitch. The instrument is generally used to accompany other instruments in rehearsal sessions or concerts of classical Indian music. But the shruti box is enjoying a renaissance in the West amongst traditional and contemporary musicians who are using it for a range of different styles.

We carefully sampled the individual notes, even the noises which are produced by the bellow and paid special attention to capture the unique character of a Shruti Box which can described as rough and vibrant. Traditionally the Shruti Box has a range of 13 notes which we expanded up to 3 full octaves. In order to get a realistic Shruti sound and enrich the sound with vividness we provided two kinds of pump action which can be switched on separately. We also added distortion, chorus and a rotary simulation to shape the sound as well as a special sustain mode which will play an endless drone. All these features are giving the Shruti Box nice options to shape the sound.

But that’s not all! We thought how could we push the Shruti Box forward to much more versatility? And that’s why invented the Shruti-Sizer:
If you turn around the Shruti Box you are getting to a complete different interface which has nothing to do with the traditionally Shruti Box. It reminds you to an old synthesizer look with knobs, symbols and an oscilloscope. It is a complex LFO modulation section. You can modulate several parameter by four different wave forms with a variable speed. It puts the Shruti Box to another level and lets you create individual pad sounds an even constantly evolving rhythmic textures.

The result of it all is a unique instrument and a perfect supplement to the Cinematique Instruments family.

The library is available for purchase for 28 EUR. Requires Kontakt 4.22 or higher, full version.