Cinesamples has released Handbells, a Kontakt instrument library featuring the sounds of a 2-octave chromatic handbell set recorded at the MGM Scoring Stage in Los Angeles. 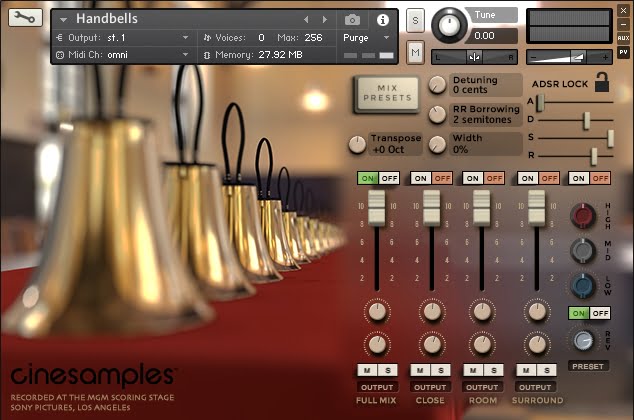 This handbell choir was recorded in a typical setup; with low notes on the right and higher notes on the left giving it a slight stereo width.

Our 2-octave chromatic handbell set was recorded at Sony MGM Scoring Stage in Los Angeles, California. This library includes full, close, room and surround microphone perspectives. This instrument features a combination of different components including a detuning and and round robing borrowing knob.

These handbells were recorded in the same way a handbell choir would naturally be setup; with low notes on the right and higher notes on the left. The transpose knob allows for easy octave transposition giving you the capabiltiy to move the instrument up and down the keyboard. Handbells features an ADSR lock allowing you to cycle through different mix presets keeping the ADSR the same. The Handbells library also includes pitched sleighbells, C-E-F-G-A.