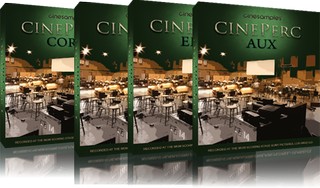 CinePerc is the definitive percussion sample library for composers of film, tv and videogames. The collection contains over 170 instruments and recorded at the world famous MGM scoring stage at Sony Pictures Studios in Hollywood by master engineer Dennis Sands.

The CinePerc libraries are available to purchase for $299 USD each. The CinePerc CORE and PRO bundle is $549 USD, and the CinePerc Full Bundle (4 packs) is $999 USD.