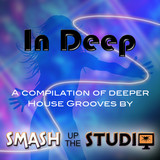 Clickproduce has announced the release of In Deep, a special content giveaway courtesy of Smash Up The Studio.

Exclusive release ‘In Deep’ is a collection of loops, hits and midi files which represents the best of Smash Up The Studio’s previous releases; ‘Chilled Out Grooves’, ‘Club Grooves’, ‘Cosmic House’, ‘Evolving Elements’, and the highly successful ‘Midi Keys’ series.

‘In Deep’ is only available from Clickproduce, and they have decided to literally give it away. It’s totally free to registered users. All you need to do is sign in/up for free then download your own copy of this exclusive pack.

Clickproduce has also announced a time limited 30% discount on the entire catalogue of Smash Up The Studio products.