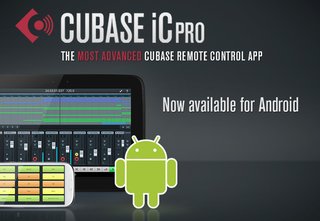 Steinberg has announced the immediate release of the Android version of Cubase iC Pro, an app for remote controlling the award-wining Cubase music production system via Wi-Fi.

Cubase iC Pro comprises different screen configurations designed to leverage the real estate of large tablet displays but also to work nicely on smaller mobile devices. The project overview allows Cubase users to navigate quickly through the project with pinch-to-zoom functionality, change tempo and add markers. The transport section comes with playback controls and metronome. The channel mixer adjusts levels, panning, mute/solo, read/write automation and record arming for basic recordings. When running Cubase versions 7.5, 7 and 6.5 with Control Room capability, users are able to set up a maximum of four headphone cue-mixes, individually controlled by each Android device. The final feature provides customizable key commands and macros that allow users to assign virtually any command in Cubase to the controller, making it highly flexible and easy to use.

Cubase iC Pro is available as download through Google Play and the Amazon Appstore. The app can be downloaded for free, but the Cubase iC Pro Remote Extension for Android is required for the connection to Cubase and is available from the Steinberg Online Shop. The price for the component is 14.99 EUR including German VAT.