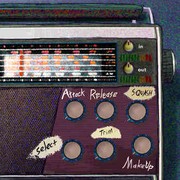 Radio Junk is a small but unique suite of effects made from 2 junky old radios, one solid-state (from the 70s) and the other a tube radio (from the 50s). The radios were ‘sampled’ using technology similar but superior to the common convolution impulses out there. It’s called Nebula, and it can capture the sound of what’s being sampled at different dynamic levels, and it can also capture some of the distortion, unlike standard convolution.

These effects use a variant of the Nebula tech called ‘Acqua’, which just means that these are stand-alone effects, and you don’t need Nebula to load them (it’s built in, basically). The radios were sampled in extreme ways to get some nasty lo-fi effects.

Since these were made with the Nebula technology, they will sound different from other plug-ins out there.

Radio Junk is available to download as a freeware VST effect plug-in.