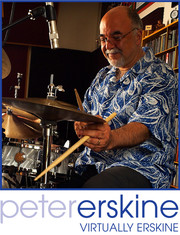 This collection features Peter Erskine playing every articulation. All recordings were done in Peter’s private studio and represent the same pristine sound featured on many of his most recent releases.

Cymbal Masters has also released the Virtually Erskine MIDI Grooves Library, featuring over 400 MIDI grooves of Peter playing 12 unique styles in 3/4 and 4/4, including Jazz, Swing, Rock, Funk and Afro-Cuban styles. The files are formatted for BFD2, BFD Eco as well as General MIDI which can be used with any GM compatible drum software or hardware.

The Peter Erskine Sample Library for BFD is available to purchase from Platinum Samples for $80 USD. The MIDI Grooves Library is $40 USD.