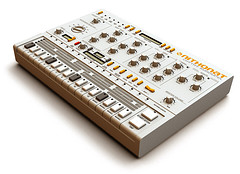 All instruments are fully synthesized and with a way more advanced and extended sound shaping capabilities than its predecessor. Whole functionality of Nithonat is very similar to the other drum machines from D16 Group, which makes it very easy-to-use and creative instrument.

Nithonat has stunning GUI kept in the same fashion as well known Phoscyon’s interface. Since the both small brothers are back together shoulder to shoulder.

Nithonat will be released as a plug-in for Windows and Mac (both VST and AU are planned to be released simultaneously).