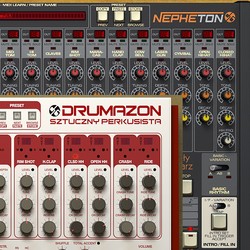 D16 Group has released updated versions of Nepheton and Drumazon, two virtual drum machine instruments for Windows and Mac, capable of emulating the sounds of the 808 and 909 drum machines.

Nepheton and Drumazon have been officially updated and since now, they’re are also available as MacOS Audio Unit format.

Both Nepheton and Drumazon also include many changes for unification with other D16 drum machines, details here.