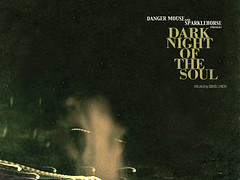 The BBC reports on some kind of dispute between Danger Mouse and record label EMI, who reportedly cancelled his new album, Dark Night of the Soul.

A spokesperson for the producer said:

“Danger Mouse remains hugely proud of Dark Night of the Soul and hopes that people lucky enough to hear the music, by whatever means, are as excited by it as he is.”

He added that the album, which comes with a limited edition, “100+ page book” of David Lynch photographs inspired by the music “will now come with a blank, recordable CD-R”.

“All copies will be clearly labelled: ‘For Legal Reasons, enclosed CD-R contains no music. Use it as you will.'”