Daniel Larsson & Fredrik Segerfalk have released SidTracker64, a chiptune production package tool for the iPad. It emulates the SID sound chip from the dominating home computer of the 80s – The Commodore 64. 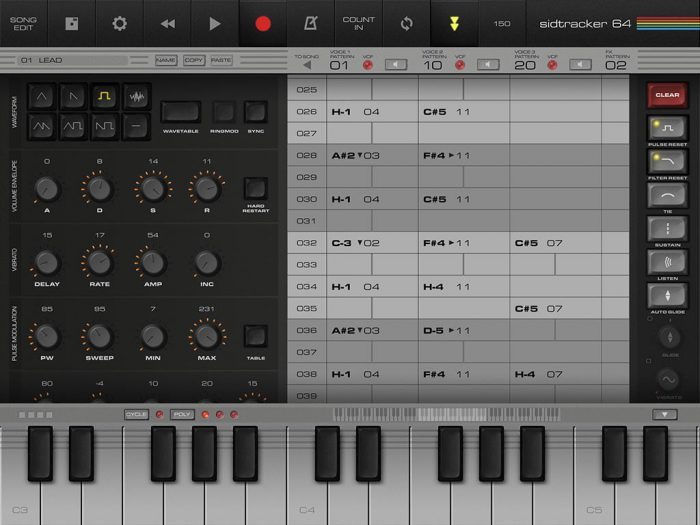 Get started immediately with the bundled songs and sounds in various styles, from old skool bleeps n blips to new school with multi speed and advanced table editing. Explore, remix and make new songs based on the old classics c64 game tracks “Commando” by Rob Hubbard or “Blood Money” by Fredrik Segerfalk, and the brand new youtube remix hit of the “True Survivor” Kung Fury soundtrack, all included in the app.

SidTracker64 is a retro-style music creation tool and synthesizer combined with modern features such as midi keyboard and controller input, Audiobus 2 and Inter App Audio for recording in your favourite DAW-app. Midi clock in lets you sync to other apps and hardware drum machines and synthesizers, such as the Elektron Analog Four.

SidTracker 64 can be used for live looping, making complete songs, and the minimum latency makes it suitable for live use. Export your music to Dropbox and e-mail as audio or .sid and even .prg files which you can run on a real Commodore 64.

Editing is based on hands on touch interaction or midi input instead of the hardcore style of direct data editing. Record live to a metronome or input notes step-style. Real SID-composing has never been simpler and more fun!