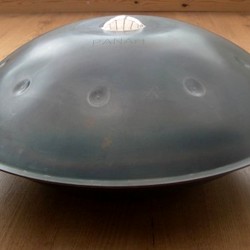 I decided I should sample the instrument, and brought a few mics, my laptop and interface round to my friend John’s house. I had John play each note around the drum at increasing velocities (quietest through moderate, to hardest), using the flat of his hand, his knuckle or a rubber mallet, so as to capture a variety of tonal characters.

I recorded each strike using an AKG C414B and Beyerdynamic M160, using the mid/side micing technique which produces a recording with a wide stereo image, but which also sums perfectly to mono. Once these differing velocities were captured, I processed the recordings (EQ, compression, noise gate), mixed them and bounced the entire recording to one stereo file, which I then sliced up manually and loaded into Kontakt, scaling the incoming velocities to trigger the recordings of the drum being hit at the respective velocities.

Importantly, I removed the velocity to volume modulation which is typically a default setting for most synths/samplers, as the recording of the lighter velocities are, naturally, lower in volume than the higher velocities.

The 147 MB download is available from Dark Arps at no cost.

Prime Loops launches The Big Drop Sale – up to 50% off

Beatstruggles launches The Loop Game Round 3