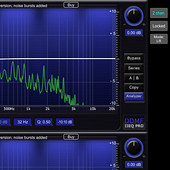 DDMF has released version 2.2 of IIEQPro and version 3.3 of LP10, two equalizer effect plugins for Windows and Mac.

The main change is that the separate plugins for true stereo operation have been merged into the main plugin.

There’s now a “2 chan.” button in both EQs that switches between normal and two stereo operation. Apart from that, a few minor graphics bugs have been fixed as well.

The update is free for existing users.