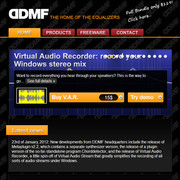 DDMF has updated its plug-in chainer Metaplugin to version 2.1, released Virtual Audio Recorder and a plug-in version of ChordDetector.

DDMF has released version 2.2 of the plugin chainer ‘Metaplugin’, now with a separate synth version to build not only metaeffects, but also metainstruments (now also with a 64 bit version for Mac, VST/AU).

Also, a plugin version of the previously standalone app ‘ChordDetector’ is now available for both Windows VST and Mac VST/AU (32/64 bit).

Finally, Virtual Audio Recorder has been released, which is a spin-off of Virtual Audio Stream and specifically designed to record Windows audio streams (the “stereo mix”). This program is Windows only.