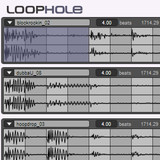 de la Mancha has announced the release of loophole, a midi-triggered loop sampler, which allows you play sections of up to 4 different loops using midi notes to control which section of which loop plays.

This can be a great way to mash up 4 different loop styles or add quick variations on 4 similar loops. As well as having full control of which sections to play, you can also trigger random sections too (well this is a de la Mancha plugin!)

You can load any 4 loops and sync them to host tempo, then using midi notes you can play the loops, switching between loops, playing several loops and defining which sections play. You also get a visual display of the loops, the play position and which sections are being played. The multi-out version lets you apply further effects processing to each loop separately. Loophole also has a volume envelope per loop to declick or fade in/out

loophole is available to purchase as a VST instrument plug-in for Windows PC for the introductory price of $24 USD until 6 May, 2010 (regular price $29 USD).