Denon DJ has announced that its Prime 4 smart controller is now enabled for both hard-wired and Wi-Fi internet connection, via a new v1.4 Firmware update. 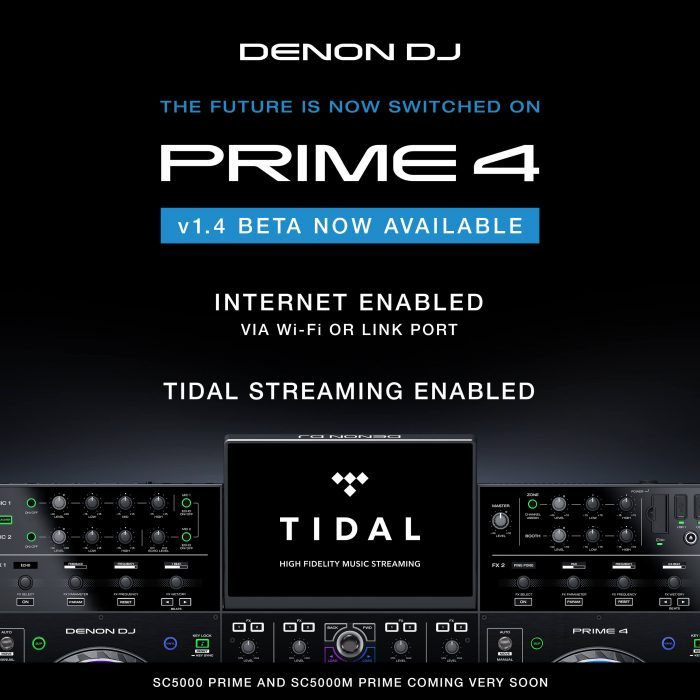 As previously announced, this update, delivered within a forum-based public beta initiative, brings the global stream and entertainment platform TIDAL—the first of Denon DJ’s premium content streaming partners— to the Prime 4, with SC5000 and SC5000M support to follow in short order.

With access to over 60 million songs, standalone streaming with the TIDAL platform gives DJs a huge variety of music that will completely satisfy any crowd, dancefloor or event. DJs can easily access their personal TIDAL playlists and also follow the platform’s own expertly-curated selections. With so many tracks and exclusive content across a massive variety of music styles, DJs will be prepared for any request at every conceivable gig – and it’s all standalone within the Prime Series hardware.

This v1.4 Firmware update for the Prime 4 hardware activates exciting new streaming performance innovations, marking a turning point in the history of DJ technology. Since TIDAL playback is standalone, with no laptop needed, all the DJ’s music can be streamed using just the Prime 4 unit. Denon DJ’s two standalone media players, the SC5000 and SC5000M will follow in short order. In addition, V1.4 brings enhanced search speed, visual feedback, performance and stability improvements to this Prime Series hardware.

“Denon DJ’s standalone streaming technology enhances the physicality of the DJ’s music collection, bringing a glorious diversity and choice of the world’s music, to their fingertips,” said Denon DJ’s Creative Director, Paul Dakeyne. “Now with access to TIDAL music’s 60+ Million songs, the WiFi switch is ‘On’, and this Public Beta program ushers in the next DJ workflow and performance paradigm for our customers.”

Further details on the public beta are available from the Denon DJ forum.