Audio Damange has launched Discord4, an updated version of the popular stereo pitch shifter effect plugin that was originally modeled from the H910. 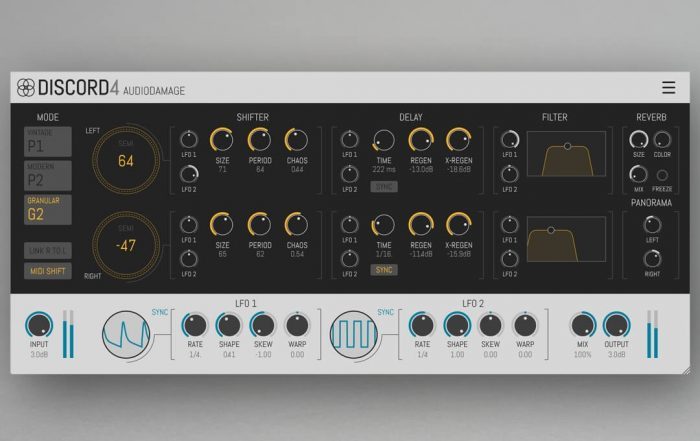 The pitch-shifter consists of three separate algorithms: a “vintage” mode (the original Discord algorithm, modeled on the Eventide H910 and H949), a “clean” mode for more modern shifting sounds, and a “granular” mode for experimental effects. Each mode has its strengths, depending on the input material, and Discord3 has a broad palette of capabilities as a result. The P1 and P2 algorithms have full control over the buffer (window) size of the shift effect, for fine tuning the shift to the input signal, or for stranger sound effects. At the extremes of the six-octave shift range, some truly strange aliasing and artifacts can be had with this control.

Discord4 retains its pair of tempo-synced delays and bandpass filters from previous versions, and adds a reverb in the feedback loop (for easy access to “shimmer” effects). We have also replaced the modulation sources from the original with our all-new FLFO (Flexible LFO) design. Panorama controls are included to control the stereo width of the wet signal. Finally, soft saturation and limiting have been added or improved throughout the signal path, for an overall improved sound and added vintage-style warmth, and to allow for extreme feedback experiments without fear of overloading your DAW’s channel.

Discord4 (VST/VST3/AU/AAX) is available for Discord for $59 USD. The upgrade for existing Discord users is $10 USD. iOS AUv3 and IAA Standalone is coming soon.

Future Sound of Retro Underground for Repro by Plughugger