Josh Fifelski has launched a Kickstarter project for the DrēmTrigger 2-pad MIDI drum trigger that enable musicians to add depth to their acoustic drums. 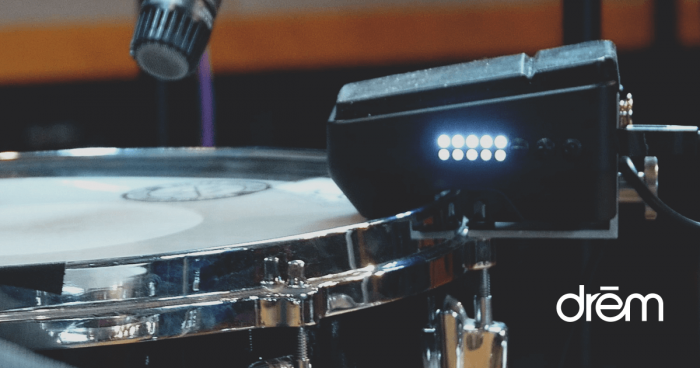 DrēmTrigger founder and creator Josh Fifelski, a drummer for 15 years, says he began developing the device three years ago because of his frustration with the market’s existing drum triggers – electronic transducers attached to a drum, cymbal or other instrument to enable it to control an electronic drum unit or a similar device.

“All the current products on the market were using 20-year-old technology, making almost no improvements in drum triggers from year to year, and still charging an arm-and-a-leg for a sub-par product,” Fifelski said. “I was sick of the limited options for quality electronic drum gear, so I set out to build a better drum trigger.”

DrēmTrigger is a plug and play, stand-alone device that transforms the way drummers drum by using lasers to allow them to blend additional elements to the organic sound of the drum.

“Drummers can attach a DrēmTrigger to their drum and layer on a hand clap, or finger snaps or any other kind of sound,” Fifelski said. “This allows them to sound different from song to song. “In addition, DrēmTrigger has two pressure-sensitive pads that drummers can strike to add loops, or more one-shot sounds to be fired during a song by using a foot stomp sound or pop toms.”

“I love big drums, solid playing, playing with the click in the pocket, and that’s my focus as a drummer, but electronics is where the future is going and you have to either move along with it or you’re going to be left behind and jobless,” he said.

“Drummers need to educate themselves to be creative in that world as well. With a product like DrēmTrigger, it expands your ability and your sound…and it brings more value to you as a player and a musician.”

DrēmTrigger has a rechargeable battery, providing eight-to 10 hours of power, along with 4 GB of onboard memory that allows drummers to drag and drop up to 24-bit audio directly onto the device for ease of use and transportability.

“DrēmTrigger is also a MIDI controller that hooks right into Ableton, one of the most powerful life-performance tools musicians use on stage all over the world,” Fifelski said. “This gives drummers access to a plethora of features including actions, like lighting cues or simple song changes.”

In developing the DrēmTrigger, Fifelski says his team took the standard process of needing a trigger, a module, a computer and software to be constantly running, and created a single hand-held device. They then added lasers to allow the drum “to fully breathe” when being used with DrēmTrigger, then added pads, battery, and 4 GB of memory and allowed it to work out of the box as a stand-alone or as a MIDI controller.

“We are the ‘Swiss Army Knife’ of drum products,” he added.