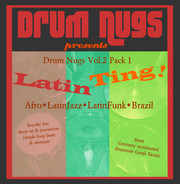 Buy LatinTing! before 5/1/11 and receive a 50% discount on the next release of Drum Nugs Vol.2 – AfroDiaspora – classic Afrobeat and Afro influenced grooves available 5/1/11