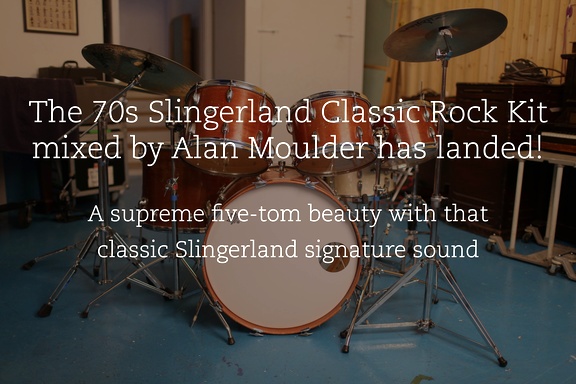 This 1970s Slingerland Classic Rock Kit is a truly spectacular kit. A deep sounding kick drum, five toms and a classic Slingerland Radio King 14″ x 7″ snare drum, makes this kit a great choice for anyone who wants to re-enact their 70s rock classics. However it is not a one-trick pony as often shown by the engineers and producers who use it on their records while working at the Pool studio in London where it resides. To get the best out of this kit we enlisted the help of one of the leading alternative rock mix engineers in the world – Alan Moulder.

Alan Moulder needs no introduction. Voted UK Producer of the year in 2014 for the BRIT awards and Music Producers Guild Awards, Alan is one of the UK’s most sonically innovative Alternative Rock Producer/Mixers. Working prolifically in the UK and USA, Alan has been at the helm of some of rock music’s most iconic records and his credits include Nine Inch Nails, The Killers, The Smashing Pumpkins, Foo Fighters, My Bloody Valentine, Them Crooked Vultures, The Jesus and Mary Chain, Arctic Monkeys, Led Zeppelin, Death Cab For Cutie, Foals and Royal Blood to name but a few.

A Kontakt 5 pack and a BFD pack which are scheduled for release soon.