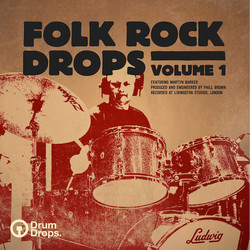 Folk Rock Drops vol. 1 contains 16 drum tracks taking influence from a range of folk rock tracks. Most of them are based on songs from the 60s and 70s. The drums were played by Folk Rock expert Martyn Barker and recorded by legendary Producer / Engineer Phill Brown. The album was recorded at the historic Miloco Livingston Studios in London using a 1966 Vintage Ludwig Hollywood Kit.

The grooves on these tracks take reference from artists such as John Martyn, Traffic, Neil Young, Nick Drake, Fairport Convention and Bob Dylan. Ranging in tempo from 74 BPM to 162 BPM there is a huge range of tracks and grooves to choose from. There are a few 3/4 options and a couple of tracks were played with brushes and hotrods.