Dualo has announced it will introduce its du-touch S – a new, smaller and more accessible version of the du-touch, exclusivity at the upcoming Frankfurt MusikMesse, April 7-10th, 2016. 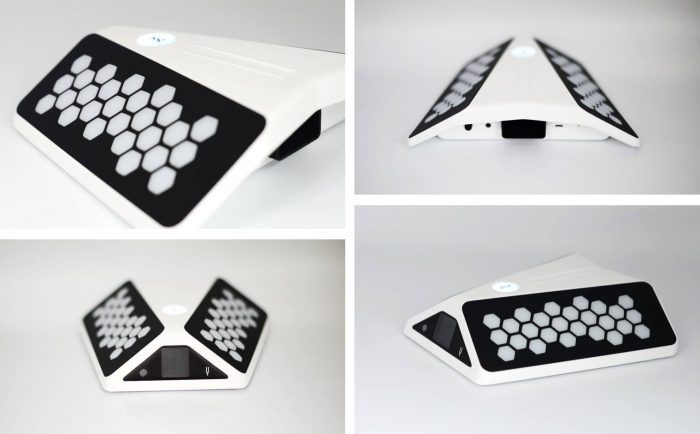 What is the idea behind “the du-touch”?

The Dualo was born with the invention of a new key layout: the dualo principle. With this layout, Jules Hotrique et Bruno Verbrugghe wanted to answer the needs of 21th century musicians. Through years of touring with a prototype, they gathered thousands of wishes. Thus, by responding to the needs of musicians, they decided to create a mobile, “all-in-one”, autonomous, intuitive and connected instrument.

The result is a new kind of musical instrument. Thanks to a very unique and intuitive interface, anyone can create and mix full multi-tracks song without ever connecting to a computer. A skilled musician can create his own songs immediately. As for a beginner, a few weeks will be necessary to make the first song.

This intuitiveness remains in the “dualo principle”, where the scale is divided over both hands. This way, consecutives pads will sound well together from a harmonic point of view, so chords are played by pushing pads which are grouped. Add the fact that the du-touch displays the scale, and you just have to follow the lit path to stay in tune.

The du-touch has been invented with the aim of breaking down all the obstacles to music playing: the key layout helps you navigate within the scale, you play all the instruments and learn to order them adequately, you record with one hit, you can practice wherever and whenever you want etc. We realized that we needed a more affordable version of our product to really democratize music practice.

The new du-touch S includes the same features as the original but has 52 pads (instead of 116 for the du-touch original), which provide 3 octaves of tessiture. However, the new du-touch S will release with the eagerly awaited sampler feature which allows you to put your own sounds in the du-touch. More compact, more complete, simpler and cheaper, MusikMesse visitors would have the opportunity to see it Booth 9.1 B25. For the other, RSVP on Kickstarter on April, 12th.

Why Kickstarter and why crowdfunding?

We launched the first du-touch on a French crowdfunding platform: Kisskissbankbank. We raised 22 270 € of our 10 000€ goal to get the material to start production for a small batch. Now that we have gathered a lot of reviews, advice and that we have a more mature product we are ready to take a step forward by making our concept known worldwide. Kickstarter is the most ambitious platform for musical instruments and we really think that our du-touch has the potential to be on par with Oval, Jamstick or Artiphon. RSVP on April the 12th to be among the first backers to get the du-touch S with very interesting offers!