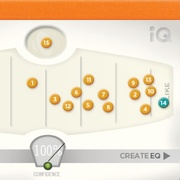 iQ recommends equalizer settings by analyzing user ratings of examples. The result is displayed in a traditional equalizer window where users can fine-tune the recommendation.

“The idea for iQ came during a recording session when a client asked me to make the vocal track sound ‘buttery’,” said Andrew Sabin, Ear Machine owner and psychoacoustics researcher. “The client knew what he wanted, but wasn’t able to describe the settings that he was after. We designed iQ to help engineers communicate more easily with their clients, and to help beginning audio engineers figure out the sound they’re looking for.”

With iQ, users indicate how much they like each of a series of example settings by arranging dots from left to right, where each dot represents a different EQ setting. iQ uses a model of auditory perception to gradually hone in on the user’s preference. A meter at the bottom of the window indicates when iQ thinks it has learned what the user wants. The user then clicks “Create EQ” and iQ’s recommendation is displayed in a traditional equalizer window. Users can also double click any dot to display it in the equalizer window.

iQ for Windows and Mac (VST/AU, compatible with RTAS wrappers) is available to purchase for $19.99 USD.