Ear Machine has launched myMicSound, a free web application that simplifies the difficult task of using your ears to decide which microphone to purchase. 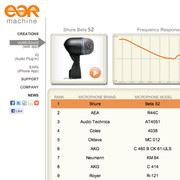 The application learns the user’s preference by analyzing ratings of example microphones. myMicSound then returns a list that ranks microphones by the probability that the user will like their sounds.

“myMicSound is the first step toward a fundamental change in how people decide to purchase audio equipment,” said Andrew Sabin, Ear Machine owner and psychoacoustics researcher. “Currently, people make these decisions by receiving recommendations from friends, or by conducting a clumsily-organized listening comparison. myMicSound offers users a simple format to use their own ears to conduct a free, controlled, and comprehensive listening test.”

myMicSound is the first sound-based recommendation engine in the audio equipment market. Its software algorithm relies on state-of-the-art knowledge in both auditory perception and computer science. Similar algorithms, such as the one used by Pandora, are widely used in music recommendation.