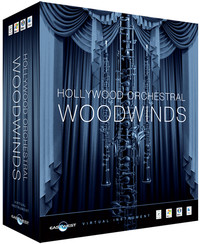 Eastwest has announced it is now shipping its Hollywood Orchestral Woodwinds virtual instrument for Windows and Mac.

Over 70 weeks, the EASTWEST team recorded, edited and programmed every nuance of world-class orchestral woodwind players with meticulous care. The result is a comprehensive library of breathtakingly real woodwind sounds – the perfect addition to the critically acclaimed Hollywood Strings and Hollywood Brass.

Hollywood Orchestral Woodwinds is the most powerful, realistic and complete woodwind virtual (software) instrument, weighing in with a massive 145 GB of meticulously captured realism and detail.

As with Hollywood Strings and Hollywood Brass, this library was sound engineered in the legendary EASTWEST Studio 1 by Academy Award, C.A.S. (Cinema Audio Society), BAFTA, and EMMY award-winning sound engineer Shawn Murphy, who has recorded and mixed the scores for more than 300 feature films including Indiana Jones and the Kingdom of the Crystal Skull, Star Wars: Episode II and III and many more.