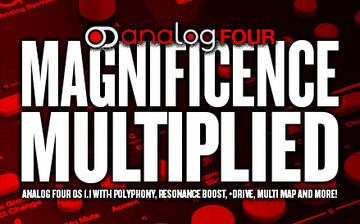 Elektron has launched OS version 1.1 for the Analog Four, and the first OS for the new Analog Keys synthesizer.

Analog Four was recently voted Hardware of the Year by the readers of Future Music, and now Swedish instrument maker Elektron is releasing a powerful new OS, making the analog tabletop synthesizer even better.

The firmware update is now available to download from Elektron.