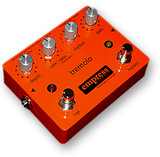 We’ve packed all the features from the pedal and added some bonus features that you’re going to fall in love with.

Visit Empressplugins.com for more information and audio and video demos.