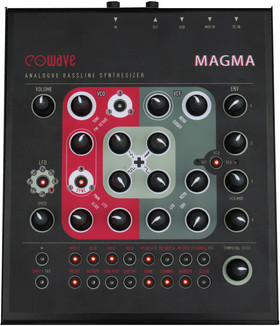 Our prototype called KOMA has become the MAGMA! The MAGMA is an analogue bassline synthesizer inspired by classical synths from the 1980s. It offers the possibility to mix 4 different waveforms (saw, square, sub, noise). The 24 dB low-pass filter is also inspired from classical filters from the 80s.

To this particular sound of the 80s, we added a touch of modernity with modern controls and parameters saving features. The 16 steps sequencer has 4 rows: 1 for the notes and 3 freely assignable to a parameter of your choice that enables to create living sequences with sonorities like Vince Clark or Yann Hammer.