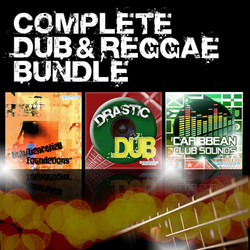 ‘Complete Dub & Reggae Bundle’ combines the three most popular Equinox Sounds Dub and Reggae collections into one big bundle making this an invaluable tool for all the Dub, Reggae and Dancehall producers.

This huge bundle brings you a total of 68 Construction Kits plus 61 Dub effects and vocals. Includes ACID/WAV and Apple Loops formats.

The bundle is available to purchase for $34.95 USD.