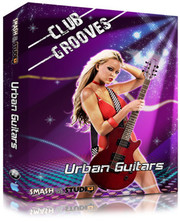 Equinox Sounds has announced the release of Club Grooves: Urban Guitars, a collection featuring guitar loops for Hip Hop, R&B and Pop by Smash Up The Studio.

We teamed up with session guitarist “Mook” Hands and his old Gibson Les Paul Custom (wine red) The amplifiers used on the sessions were a Fender 65 Twin Reverb and a Marshall MA50C. These were recorded using two SM57 microphones.

Other equipment included a Cry Baby wah wah and MXR analog delay pedal. Some loops have also been treated with some post stereo effects at the mixing stage.

Club Grooves: Urban Guitars is available to purchase as a download for $29.95 USD.