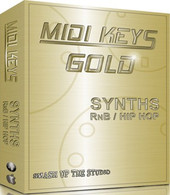 Equinox Sounds has announced the release of MIDI Keys Gold: Synths RnB & Hip Hop, a collection of RnB & Hip Hop synth progressions in MIDI format by Smash Up The Studio.

Smash Up The Studio lets you be the producer with this hot new MIDI Loop Pack. All the loops are played and programmed to perfection, all you need to do is pick a cool sound! And of course, with MIDI, you have full editing capabilities to really put your own stamp on it.