Eventide has announced it has added new presets from Roger Water’s the Wall to TimeFactor delay unit, and an additional Freeze function is now available for the Space reverb effects stompbox. 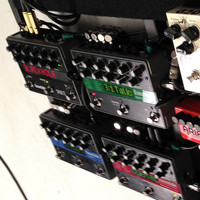 Also, the best-selling Space stompbox now includes the Freeze function which allows users to freeze the reverb and continue to play on top of infinitely sustained reverb. Also included in this comprehensive upgrade are additional new sounds and system enhancements for ModFactor, and PitchFactor as well.

All updates are free to existing users and will be included in new units shipped from Eventide.