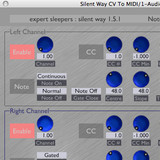 Expert Sleepers has released version 1.5.1 of Silent Way, a suite of plug-ins designed for use as part of a modular analogue synthesiser system.

Silent Way is available to purchase for PC and Mac (VST/AU), priced at $49 USD plus VAT if applicable.