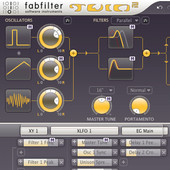 FabFilter has released version 2.10 of Twin 2, a virtual synthesizer instrument for Windows and Mac.

Twin 2 is FabFilter’s flagship synthesizer plug-in with uncompromised sound quality and creative, virtually unlimited modulation options. The new wide interface layout eliminates scrolling in the innovative component display, making it even easier to use than before. Of course, the update is free for existing Twin 2 users.

In addition, FabFilter has also announced a holiday bundle sale running until December 31, offering 25% discount on all plug-in bundles in the online FabFilter shop.