FACE – the Foundation for Audiovisual Commerce & Engineering – has taken on distribution of Solid State Logic Broadcast consoles for Benelux (The Netherlands, Belgium, and Luxemburg), and Live consoles in Belgium and Luxemburg.

These will include Live L200, L300, and L500 digital consoles, the System T networked broadcast production environment, and the SSL range of Network I/O products. 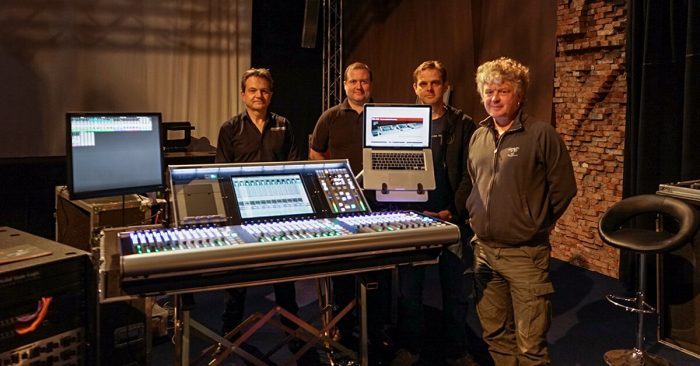 To support this new partnership, FACE will be running various launch events for both Live and Broadcast markets at its Boom, Belgium headquarters, starting with a series of broadcast technology sessions on the 7th and 8th of June.

FACE already represents a wide portfolio of manufacturers and products, with multiple aspects, including dedicated Professional AV sales and Project & Integration divisions. This breadth of interest fits well with SSLs recent announcements on integrated AoIP networking and control across its broadcast and live product ranges.

“We’re convinced of the synergy between live and broadcast for large TV entertainment shows, for example,” says Glenn Willems, Audio Specialist at FACE. “Shared resources and Dante networking is definitely a winning point.

“Both the Live as well as the Broadcast consoles fit in a network and into a stand-alone environment, and the user interface is great for stressful situations, which occur on a regular basis in Broadcast and Live.”

The CCO of FACE, Sam De Pauw, comments, “The secret of SSL’s success is its dedication to great sound and its innovative approach to creating outstanding products with absolute power and ultimate flexibility. This entrepreneurship fits perfectly with FACE, so we’re very excited to add SSL Broadcast and SSL Live to our portfolio.”

Jim Motley, SSL’s Senior Vice President, International Sales, adds: “We have been very impressed by Face’s reach in to the Broadcast and Installed markets and think that they are in a great position to support SSL’s AoIP products. The FACE team have been fast learners and I look forward to supporting them at training events and end user demonstrations in the coming weeks.”

You can now sign up for the SSL Broadcast Launch Event on June 7th and 8th.

Save 50% off Audified STA Effects & STA Preamp at Plugin Boutique