FaderPRO, the online/DVD mixing and production lessons that have earned acclaim for featuring hit making, Grammy-nominated producer/remixers will now offer for the first time video courses for download at Beatport’s SoundstoSample.com website. 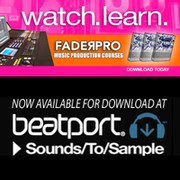 Sounds/To/Sample Director Jim Stout says, “We are extremely excited to bring FaderPRO to Sounds/To/Sample. Real-world, how-to expertice offered by platinum-selling producers is what sets FaderPRO’s courses apart from the others available today, and we’re very happy to welcome them as one of our content partners.”

FaderPRO’s Vincent di Pasquale comments, “FaderPRO flattens the learning curve; most of what I learned over the years was not by reading some instruction manual, or hearing some teacher point at things on a computer screen, but by sitting in the studio and watching the best producers do what they normally do. That is exactly the experience we bring to anyone willing to learn.”

With this alliance, FaderPRO becomes S2S’ first – and only – partner for educational “How To Make Music” videos and courses, and S2S becomes FaderPRO’s exclusive source for downloadable courses.

Adds FaderPRO’s Steven Lee, “We have specifically designed FaderPRO for the millions of talented and interested artists who are starving to learn how to make music. Our angle was simple: Go into the studios of the best producers in the world and shoot a video course that shows how they make an original song from start to finish. Topping it off is the user’s ability to get hold of every element of content used in the video and learn by doing the work alongside the Pro.”

DVDs and web-streaming courses will still be available directly from FaderPRO.com

All future FaderPRO courses will be available for download at Sounds/To/Sample as well.