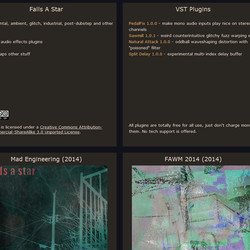 Octave Riot is an octave divider in the Boss OC-2 style (flipping signal polarity rather than generating square waves) with some extra features.

The divider subtracts a moving average from its input sample, and that may or may not be why there are a few settings that will actually work as an octave *up* effect.

The plugin is available as freeware for Windows (VST).