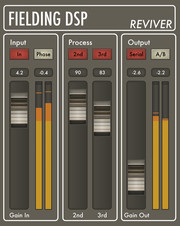 It’s been a while since the last update of Reviver, our acclaimed harmonic distortion plugin – mostly because it just works. Today, however, we are happy to announce two major upgrades:

When we first started Reviver, our customers were mostly professional producers or engineers. With the prices of DAWs and other plug-ins dropping rapidly, however, professional tools have become accessible to semi-professionals and hobbyists. We think this is a great development allowing a whole new range of musicians and producers to take part in this creative process.

We believe that the future of music production will allow anyone with talent, regardless of their budget, to make good music and be successful. For this to happen, high-quality tools need to drop in price. Fielding DSP is taking a first step in this direction by radically dropping the price on its flagship product Reviver.