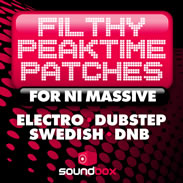 Influenced by the biggest hitters in Techno, Electro, Swedish House and Dubstep, Filthy Peaktime Patches takes aim at scene stars such as Umek, Dada Life, Swedish House Mafia and Afrojack.
Instant sounds that will raise the standard in your productions to compete with today’s main room music makers.

The soundset is available to purchase for £16.95 GBP.