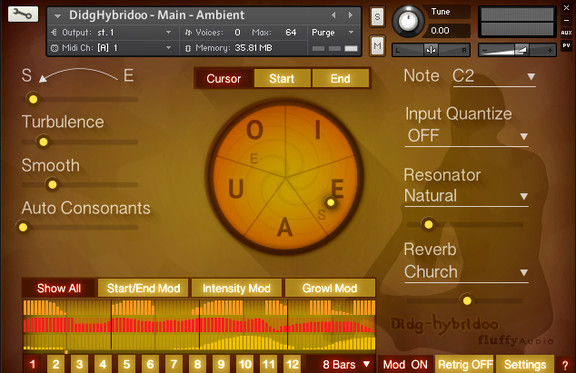 DidgHybridoo does not rely on sampled phrases or generic uncontrollable drones. It is a hybrid solution that not only morphs between the different vowel samples, but enhances the vowels with the help of a custom formant filtering engine, so a user can make a virtual didgeridooist pronounce different vowels and smoothly change between them.

With DidgHybridoo a user can design their own rhythms by customizing the 12 rhythm patterns. The VowelWheel allows the user to fully customize the vowels the virtual didgeridooist will sing. The patterns control how much the cursor moves between the Start and the End vowels, the intensity of the playing and how much the didgeridooist growls.

A user can alter the sound of DidgHybridoo in various ways; by changing the formant frequencies, altering one or more overtones, adjusting the gain of a single overtone, or adding a resonator to enhance particular frequencies. This is designed to make the instrument suitable to many sound design experiments. Included are NKI’s with morphable drones, didgeridoo-basedsoundscapes and rhythmic resonant sequences. The sequences can be smoothed or randomized to give more realism to the final performance.

There are three main patches in DidgHybridoo: an ambient-filmscoring patch and two different sounding ones which suit the best for modern music.

The library is available for an introductory price of until January 6th, 2015 (regular 39 EUR/$49 USD). Requires Kontakt 4.2.4 or higher, full version.

What is Simple Flute? Well, it’s simply a flute! Powered by a customized version of WIPS Scripts (with the given permission of customizing it by its author Robert D. Villwock), Simple Flute is just a simple well-sounding flute for Kontakt. Thanks to the scripting engine and the sampling method used, we are proud to present a super playable instrument, which can be played at any tempos, has a controllable amount of vibrato, three phase locked dynamic layers, legato control, two (long and short) articulations, 3 Round Robin for the short articulations, micro tuning presets and a wide selection of impulse reverb presets.

Simple Flute enables the user to play with breath and wind controllers, has a keyswitching ability to change to the desired articulation and features a super smooth crossfading between the three dynamic layers. Moreover Simple Flute can perform very realistic trills and grace notes.

Simple Flute will be one of the instruments featured in our upcoming release Simple Winds, which will feature more than a dozen of other wind instruments like a clarinet, a bamboo sax, a slide flute, a penny whistle, ocarinas, a fife and so on. Simple Winds will also feature some strange and quirky custom designed instruments and toys.

Simple Flute is available for download at no charge. Requires Kontakt 4.2.4 or higher, full version.